The Human Rights Campaign announced that it will host a national virtual event, “Time for Equality,” on Thursday, April 22. The event will mark the first 100 days of the pro-equality Biden-Harris Administration and demonstrate HRC’s renewed push to fight to ensure equal rights for the LGBTQ community. HRC will also honor the FX show “POSE” as it enters its third and final season with the National Visibility and Impact Award.

The event will honor the critically acclaimed Emmy and Golden Globe nominated FX television series “POSE” with the National Visibility and Impact Award, with cast and creators Steven Canals, Mj Rodriguez, Billy Porter, Dominique Jackson, Indya Moore, Hailie Sahar, Dyllón Burnside and Sandra Bernhard speaking at the event. “POSE” is a groundbreaking show that features the largest cast of openly transgender and LGBTQ actors ever in a network series, and spotlights ballroom culture in New York in the 1980s and 1990s. The final season begins May 2 on FX.

“Time for Equality” comes as we continue to see increasing attacks on LGBTQ people, and especially transgender and non-binary people, at the state level. There are so far more than 220 anti-LGBTQ bills under consideration in state legislatures across the country. Of those, more than 110 directly target transgender people, a record number for a single session since the Human Rights Campaign has been tracking legislation. Legislators across the country have failed to provide examples of issues in their states to attempt to justify these attacks, laying bare the reality that these are attacks on transgender youth that are fueled by discrimination and not supported by fact.

Since the Biden-Harris Administration took office in January, there has already been great progress made for LGBTQ people. On his first day in office, President Biden issued the most substantive, wide-ranging LGBTQ executive order in U.S. history, affirming the decision in Bostock vs. Clayton County and extending protections against discrimination on the basis of sexual orientation and gender identity. President Biden has also repealed the ban on transgender military service, voiced his support for the Equality Act and released a message on Transgender Day of Visibility. He also nominated two history-making LGBTQ nominees, Pete Buttigieg and Dr. Rachel Levine, who were both confirmed by the Senate. Most recently, the Department of Justice has clarified that Title IX of the Education Amendments of 1972 prohibits discrimination on the basis of gender identity and sexual orientation in federally-funded education institutions. For more details, please visit HRC’s President Biden's Pro-LGBTQ Timeline.

Last fall, HRC hosted “Unite for Equality Live,” which replaced the Human Rights Campaign’s annual National Dinner in 2020 and raised funds for the critical fights ahead to protect and expand LGBTQ rights in the United States and around the world. 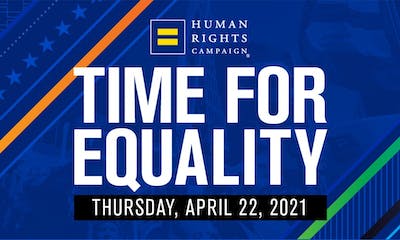